I participated in a workshop in Rabat, Morocco, last week (30-31 October) organized by United Cities and Local Governments of Africa (UCLG-Africa). 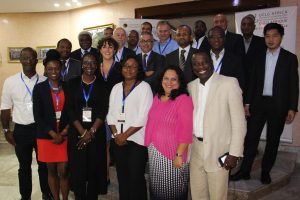 The object of this event was to discuss a roadmap for the process of creating an African Cities Development Fund. This fund should have the aim to raise capital in order to finance, through lending, investments in African cities.

UCLG-Africa has published the following text about this workshop:

United Cities and Local Governments of Africa (UCLG Africa) (www.AfriqueLocale.org/en) organized a two-day workshop on the establishment of the African Cities Development Fund (FODEVA), October 30-31, 2017 at the Hotel Rabat in Morocco. 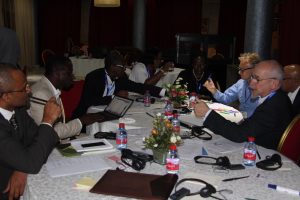 The workshop proceeded work that was carried out after the conference, “Funding African cities: agenda, alliances and solutions,” which was held in Marrakech, Morocco, in November 2014. At the conference, members of UCLG Africa agreed to establish a financial vehicle dedicated to the funding of African cities, termed the African Cities Development Fund (FODEVA). The Fund aims to enable cities to issue bonds on the national and international capital markets.
The workshop brought together twenty top level experts including specialists of fundraising on the financial markets; officials of development banks, funds or development banks dedicated to local governments; asset managers in international private banks; officials of rating agencies; and representatives of national and local administrations.

The exchange of views and experiences and the contributions of participants helped to establish that:

In this respect, a roadmap was worked out that would: 1. Define the structure of the capital: 2. Define the risk portfolio: 3. Cooperate with existing national tools: 4. Present the benefits of the vehicle: 5. Involve central governments to obtain their non-objection opinion: 6. Produce an information note on the vehicle: 7. Prepare and organize a communication campaign and a road show for the vehicle.

The intention is to finalize this roadmap in order to present the African Cities Development Fund as a vehicle of credible funding at the 2018 Africities Summit.