It is with much excitement that I have accepted to be one of the experts on a panel involved with the project of proposing alternative municipal financing models for metropolitan cities in South Africa. The project is led by South African Cities Network (SACN) in partnership with the City of Tshwane.

”In a context of decentralisation coupled with rapid urbanisation which is characterised by growing levels of poverty and informality, metropolitan municipalities’ are increasingly concerned about their capacity to deliver on their expanding functions and demands. While on the one hand cities are increasingly focal and acknowledged as important engines of growth and development, they also find themselves under extreme financial pressure which jeopardizes their mission. And while there is legitimate pressure for cities to improve their own efficiencies and maximise their revenue generating capacity, it is also increasingly evident that the current metropolitan municipal financial model is inadequate and unsustainable, using a grant system intended to plug unplanned deficits as a crutch for a financing model that is itself increasingly deficient, and also requiring creative rethinking about the kinds of appropriate innovations that could place metros on a more sustainable path to delivering development for the present as well as the future.”

The first meeting of the expert panel took place at the Rockefeller Foundation’s Bellagio Conference Center at the Como Lake in Italy during September 23 – 25. Among the participants were representatives from SALGA, the Financial and Fiscal Commission, the City of EThekwini, UN Habitat, FMDV, Japan International Cooperation Agency, and from the organisers: SACN and City of Tshwane. It was three days of intense work that laid a good foundation for the continuation of this worthwhile project. 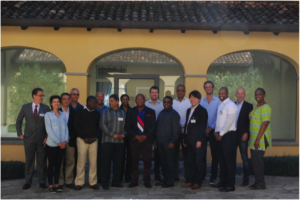 Last week, Agence France Locale had their first Conseil d’orientation stratégique in Paris. The agenda included discussions about ethics and accountability, communication, studies and training in financial matters, and international cooperation. Mme Lebranchu, Minister for Decentralisation and the Civil Service joined us in the closing of the meeting and expressed her support for the agency. She said: “You have not only managed to create this Agency in record time, but you also helped restore the image of local authorities. This Agency is a tool for trust between the state and the local authorities.”

Jacques Pélissard, former Chairman of the Association des Maires de France and one of the founding members of Agence France Locale, Mme Lebranchu, Minister for Decentralisation and Civil Service and Lars M Andersson

From Paris I went to London for meeting with, among others, Commonwealth Local Government Forum and Local Government Association. Furthermore, I met with Sir Merrick Cockell, Chairman of the Board, and Aidan Brady, CEO of UK Municipal Bond Agency. They gave me an update of the activities of the agency and showed me their new offices. 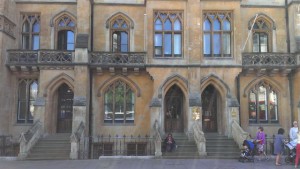 I have completed my IFC assignment to do a pre-feasibility study about the possibilities to introduce pooled financing mechanisms (PFM) in South Africa. My conclusion is that many of the prerequisites for PFM are present. It could be a way forward to further expand the cities’ financing activities on the capital market and add increased flexibility and diversification in the funding operations for creditworthy municipalities such as metros and some secondary cities. For other municipalities to become a part of PFM intense efforts must be made to increase their creditworthiness and management capacity.

The executive summary can be found here.

For more information: send me a mail to lars.m.andersson[at]maproductions.se

An investment plan for Europe – without those who really matters

European investment has decrease significantly since the years of the financial crises. This much is evident in the EU Commission’s “An Investment Plan for Europe”, published in November last year. It is, they argue, now crucial that get investments back on track and reverse a, post 2007, a 15 percent downturn of investments. The aim has to be economic recovery, job creation, long-term growth and competitiveness. One could not agree more.

IMF’s World Economic Outlook (Oct. 2014) is in line the reasoning of the EU Commission. The authors of the outlook argue that there is a huge need for public investments, and that now is the time for action. Disconcertingly, public investments have fallen over the past three decades. But the problem reaches further than low investment levels in new infrastructure, the quality of existing public asset are deteriorating. Europe, and other parts of the world need to ramp up both new investments and maintain old ones.

Something needs to be done, but who shall do it? The EU Commission’s Investment Plan for Europe has no mention of the role of local authorities, beyond one or two fleeting references to regional authorities having a role to play. It is as though cities and municipalities have been erased from the world of investments. This despite the fact that they totally determine the level of public investments in Europe. In a recent study of the OECD local government are responsible for close to 70% of all public investments.

This omission would have been more understandable if the situation for investments on the local level were back on track. But this is not the case. In many European countries, local authorities are reliant on commercial banks for the financing of local infrastructure investments. With the up-coming Basel III rules this market is changing. Banks will be required to strengthen their capital base and, in order to keep their profitability, they will need to focus on higher yielding asset than municipal loans on their books. We have already seen that banks have significantly raised margins and shortened maturities on loans to local authorities. This does not stimulate local long-term investments.

The answer from local authorities in more and more countries is to finance local infrastructure investment through their own agencies. These agencies pool the financing needs and by that reaching sufficient volumes to raise money in the capital markets with the use of bond issues. The Scandinavian and Dutch local governments funding agencies have already for a long time successfully supplied local authorities with cost-efficient financing. Now, two new agencies exist in Europe: Agence France Locale in France and Local Capital Finance Company in the UK

But now these local government agencies that have served its members so well are subject to deliberations if they should be subject to high capital claims within the Basel III rules. The major part of these agencies has guarantees signed by their members in place. Still, the regulators are looking for these agencies to have a 3% so-called leverage ratio, which would force many to substantially increase their capital. One wonders why, since the both guarantees and stable end borrowers ensures sustainable business models. If the proposed level of capital is finally established, it will means overcapitalised agencies that need to invest the increased capital in financial assets, which at times have proven risky. It would also tie up more public capital that otherwise could be used for investments in local infrastructure.

A real push for infrastructure investments should focus on the role of local authorities and their role to build growth from the foundation. It should also support the local government funding agencies and provide them with long-term beneficial working conditions. In the Commission’s Investment plan for Europe it is stated it is “necessary to improve the regulatory environment for investment”. Why don’t they start with the local government funding agencies?

The French local government funding agency, Agence France Locale, has successfully launched its first bond issue. The transaction of €750m was quickly oversubscribed; firm interest of over € 1.3bn was shown within the first hours after the launch. The bonds have a maturity of 7 years with a spread of OAT+22bp. The proceeds of this transaction will be on-lent to French local authorities for the financing of local infrastructure investments.

From Oslo to Bogotá

The new year began with a flurry of activities and stimulating meetings around the world. In mid January I was invited to Kommunalbanken in Oslo to inform the board on recent international developments in the field of local government pooled financing. Kommunalbanken published an interview (in Norwegian) with me in their magazine that can be read here.

I have also been back to Johannesburg to speak at the workshop Innovating in Financing for South African Cities, arranged by the City of Johannesburg and FMDV. My intervention was, of course, about pooled financing mechanisms. I had many warm encounters and great chances to further investigate the possibilities for financial cooperation between municipalities.

Discussions around the general theme of pooled financing and South Africa continued when I was invited for meetings with the World Bank and the IFC (International Finance Corporation) in Washington. I also did a lunch presentation to an audience from different parts of the World Bank Group. 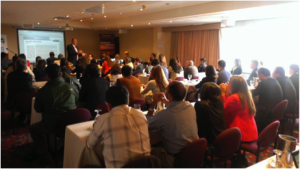 Furthermore, I participated as one of the speakers in the World Bank organized creditworthiness academy in Bogotá, Colombia, now in the beginning of February.

In connection to this event I have translated some of my papers to Spanish. They can be downloaded here: 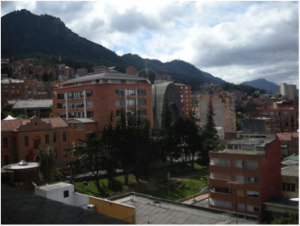 Local Government Funding Agency, a type of pooled financing vehicle that is common in Europe, but also used in New Zealand. Typically, majority-owned by local authorities.

A pooled financing vehicle used predominantly in the USA. Typically, owned by the state.

Special Purpose Vehicle, an entity created for a special reason, for example for pooled financing.

A guarantee where the guarantors are both severally and jointly liable for any claims under the guarantee (all for one, one for all). Used by, for example, Kommunekredit (Denmark) and Kommuninvest (Sweden).

In a paper now published by Fonds mondial pour le développement des villes (FMDV) entitled “What the world needs now… is local infrastructure investments – Challenges and solutions with a focus on finance” I outline how economic growth can be supported after the financial crisis. Faced with immense challenges such as rapid urbanisation and climate change, local authorities worldwide must be given the tools to support investments in local infrastructure. These investments need to be properly financed. Raised taxes and central government transfers are not enough and raising finance directly from banks and the international capital market can become a costly affair for many local authorities. This is the reason why it is necessary to look closer at the option of Pooled Financing Mechanisms (PFM) in which local authorities come together to jointly, and with solidarity, raise funding in a cost-effective way from the markets. These PFMs or Local Government Funding Agencies also help foster professionalism and transparency within local authorities, as well as contributing to increased local democracy. Read the full paper here.

From Lyon I will continue to Marrakech, to attend the conference ”Resolutions Africa – Financing African cities: Which agenda, alliances & solutions? ”. The conference is organized by FMDV, Marrakesh City Council and UCLG Africa. I will speak at Roundtable B2 ”Access to capital markets in Africa” on Friday morning next week. Read more about the conference on www.resolutionstofundcities.org

Meetings in Johannesburg and Pretoria 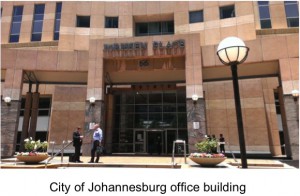 I have been commissioned to do a pre-feasibility study for the IFC, concerning the possibilities to develop pooled financing mechanisms for cities in South Africa. This week I am in South Africa meeting central government entities, the City of Johannesburg, financial institutions and South African local government organisations.